A good example of late León romanesque, built during the 12th and 13th centuries. It once belonged to the regular order of Saint Agustin. The church has three naves and four pillars supporting the round arches that separate the naves.

It was officially founded in the 12th century by the Count Fruela, El Cid's brother in law.It was ruled as a Colegiata (Collegiate Church) and a Hospedería (Hostelry) by the Augustine monks.As a result of its decline, it became a simple parish church. It was restored after the Civil War. The building consists of fine grey limestone blocks. The gothic chapel was added later, in the 12th century. The sacristy, the tower, the portico and the vaulting of the main nave date from the 17th century. 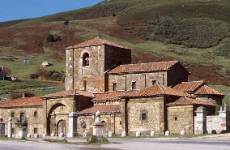