Built in the early 12th century, one of the oldest in Carrión, with a façade and three large naves.

Façade with four archivolts, several figures, four capitals topped off by four columns. The façade contains references to the famous 'Tribute of the 100 Maids', which has been turned into a legend in Carrión. The frieze represents the Epiphany and the outside structure is reminiscent of the early Romanesque style, particularly the one found in some French churches. This influence is due to the French pilgrims walking their way to Santiago, Carrión being an important stopover. 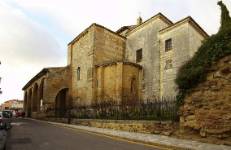 Remarks: The exhibition "Ages of Man" will reopen LUX ECCE MATER TUA from 10feb- 25 sept., 2022. The last admission will be made 30 minutes before closing. All the info in: www.eccematertua.lasedades.es ; expo@lasedades.es