Church of Santa Maria. Interpretation Center of the Blessed

The Romanesque monastery belonging to the XII century was built at the initiative of two monks, San Froilan and San Atilano, who later would be named bishops of Leon and Zamora respectively. The foundation took place in the late IX century, after the victory of Alfonso III the Great in the battle of Polvoraria. The monastery soon reached a remarkable splendor.

Chronicles show that it was formed by a double community of over six hundred religious among monks and nuns. The cause for which it disappeared is unknown, since after about a century of existence there is no longer proof of its functioning. It is assumed that it could have been destroyed by Almanzor in one of his ghazws, and that it was not rebuilt. During its brief heyday, the monastery of Tabara became famous for the books that were copied and illuminated in its scriptorium. It is to be emphasized the called Beato de Tabara, of the National Historical Archive, and the Beato de Gerona, of the Cathedral of Gerona.

Recently the Beatuses have been declared a World Heritage Site by UNESCO and of the 21 codices that are currently preserved in the world, three were made in the Scriptorium tabarense, which tells us the importance that Tábara had before the end of the first millennium.

High resolution image. This link will open using lightbox, there may be a context switch
Monasterio de Santa María 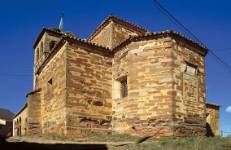