The church of Santa Marta de Tera constitutes one of the main historical and artistic values of the cultural heritage of the province of Zamora.

In 1996, it was discovered that a magic phenomenon occurs in this monastery: On the equinoxes of spring and autumn, the capital of the saved soul is illuminated by the sunlight that enters through the oculus of the gable of the head. An event that each year concentrates more visitors.

Only the Romanesque church with a Latin cross plan, with a single nave with three sections, is preserved from the old monastery. Two sculptures of San Pedro and Santiago from the 12th century stand out on the outside. The asymmetry of its covers, gable, south side in the second section and north side in cruise are surprising. This church has a significant number of significant capitals on the south portal, in the transept and head, especially in the presbytery, with the iconographic ensemble of the highest plastic quality and highest meaning of the church. The cornices and trimmings of the eaves and arches are decorated with banknotes, while that of the capitals has variety, reproducing cut-out leaves, angels and saints, linked stems and human heads.
This temple is an important Jacobean enclave, which marks the beginning and end of one of the stages of the Camino Sanabrés to Santiago, a branch from the Vía de la Plata. But the real protagonist of Santa Marta de Tera, who has been the cover of countless books, prints, postcards and all kinds of Jacobean iconography and merchandising, is the sculpture of the Apostle Santiago with a round package. Considered by most scholars to be the oldest known pilgrim Santiago representation that served as a model for the iconography of the 1993 5 pesetas coins. 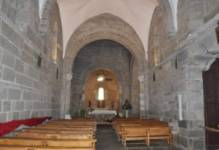 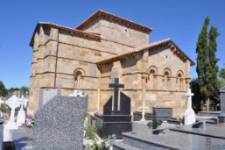