With French influenced from the region of Poitiers

Built between the 12th and 16th centuries, whish shows in the combination of styles.

The façade dates from the second half of the 12th century, with French influenced from the region of Poitiers, particularly apparent in the series of blind arches on both sides of the front and in the profuse sculpture decoration of the façade. The large rose window in the centre of the pediment dates from the 13th century.

Front with tympanum and archivolts, presenting scenes of the Old and New Testaments (in the tympanum is God with Jesús Child on his lap). The front is flanked by two figures that, according to legend, represent Alfonso VIII and Doña Leonor. 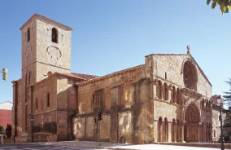 Remarks: Open daily throughout the day.