Church of the Santos Juanes

The Main Altarpiece was built by Francisco Velázquez, with sculptures and paintings by Gregorio Fernández and Francisco Martínez, respectively.It consists of two sections brought together by an attic. The chapel is polygonal and contains bass-relieves and sculptures in several vertical lanes and spaces. The church also holds true works of art such as the Descent altarpiece, recently restored, the altarpiece of San Antón, by Diego de Acnique, or the reliquary altarpiece dating from the 18th century. 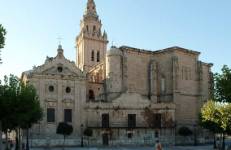 High resolution image. This link will open using lightbox, there may be a context switch
Iglesia de los Santos Juanes