Church known as 'El Robledo', which may have originated in medieval times, but in 1622 it suffered a terrifying fire that completely destroyed it, for which it has undergone several reforms.

Its architecture is very simple, with a quadrangular main chapel and a dressing room in which the remains of Simón Vela and the Holy Moza rest, linked to the discovery of the image of the Virgen de la Peña de Francia.

Inside, the Mudejar coffered ceiling has an inverted trough shape in the central nave, being that of the main chapel with octagonal armor. It has several altarpieces and sculptures of interest. Outside, bulrush rebuilt several times. 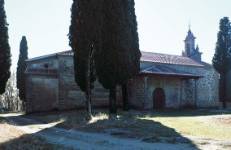