One of the best cothic churches of the 16th century

This church represents a paradigm for single-nave, salon structures and will be the precedent for many future churches due yo its spatial conception and purity of lines, which make it one of the best cothic churches of the 16th century. The first stone was placed in 1526 and was blessed in 1530. The works went on during the whole of the 16th century.

Ten parishes joined efforts to finance this projects. They were all demolished and made into one. The church was built at the behest of Íñigo Fernández de Velasco, Condestable of Castile, and his wife, Ana María Tovar, the dukes of Frías, who turned the church into a collegiate church in 1514.

The main altarpiece is dominated by the sculpture of Nuestra Señora del Mercado (Our Lady of the Market), after whom the Colegiata is named, a Romanesque-Gothic statue dating from the 12th century that was brought in from one of the ten parish churches that were pulled down in order to build the new church. 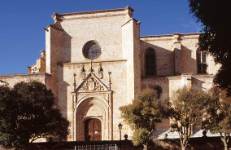