It is a simple Renaissance classic building of the end of XVI century and beginning of the XVII. It has a Latin cross ground plan with a dome over the transept and the nave covered with half barrel vaults with lunettes. It was built to commemorate the apparition of the Virgin Maria, with the child Jesus, to a shepherd, in the middle of the XV century, according to tradition tells us 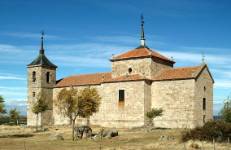