Shrine from the first half of the 12th century. Built on the site of a 9th-century monastery that became dependent on Oña in the 11th century.

Consisting of a single nave with barrel vaulting and transverse arches, it has a hemispherical dome over a squinch and apse with seven blind arches. The 14th-century choir has coats of arms of the Velascos. 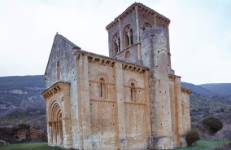