Shrine built in the middle of the 16th century. It has a beautiful alcove for the virgin that is paved with Talavera ceramic. It is surrounded by a portico in the form of a pise-de-terre.

Stone and mud erection with a single nave, belfry at the base and a portico of six columns. The nave has 16th-century Mudejar frame in the form of an inverted trough with four inclined boxes decorated with twelve board paintings of the Old Testament. The side-walls still have remains of multicoloured paintings with floral and geometric motifs, imitating curtains and tiles. 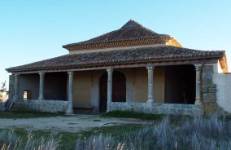