Parish Church of the Asuncion

Built in the 16th century, with gothic ribbed vaults. The three-body front is renaissance and has been attributed to Juan de Escalante.

Manuel Álvarez was responsible for the 16th-century altarpiece, whose three bodies contain the figures of the apostles and biblical scenes. The sculpture in the tabernacle is by Gregorio Fernández.The church contains the sepulchre of Alonso Velázquez, the bishop of Osma and archbishop of Santiago de Compostela, as well as the confessor of Santa Teresa, chaplain of Felipe II and one of the village's factotums. 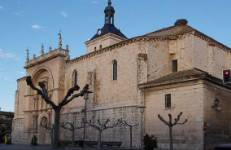 High resolution image. This link will open using lightbox, there may be a context switch
Iglesia parroquial de la Asunción