Documentary evidence that this church existed already in 1244, although from that time only the apse has been preserved, in the Romanesque-Mudejar style, since the nave and the belfry are the result of a reform that was made in the 70s of the 20th century.

The apse, built in brick, is semicircular and is preceded by a straight presbytery section. It stands out for its decoration organized in three rows, with semicircular arches the first, followed by arches framed in alfiz, to finish with blind boxes.

Its interior is covered by a barrel vault and the blind arches and the corner frieze finishes stand out. 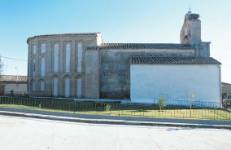