The building has undergone several alterations in the XVI, XVIII and XIX centuries. It is organised in a single nave, divided into three sections which are individualized by arches of semicircular diaphragms, covered with wood, more a main chapel with an ultra semicircular apse which, apparently, has been rebuilt.

The most interesting thing about this church are the Romanesque capitals of the Toral arch. One of them represents two lions with a common head and a harpy, similar to one of the capitals of the church of San Martín de Salamanca; and the other a basilisk and two eagles. On each one of them, stone walls decorated with leaves inscribed in circles that recall the work of the Old Cathedral. 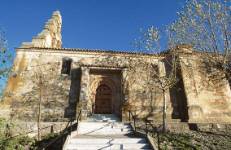