It was built in the XVI century, using a Gothic structure, being its current image the result of the numerous reforms made in the XVIII and XIX centuries. It consists of a single nave with three aisles which were covered with Baroque plasterwork in 1772.

The transept, which retains its Gothic style, is covered with a ribbed vault with tiercerons of XVI century. A triumphal semicircular arch to access to the main chapel, with an interesting cul vault with decoration in the form of shell or scallop shell. 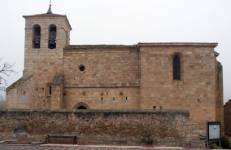