The apse of this mudejar romanesque church has a triple row of arches and is covered by a round barrel vault and supported by three pointed arches.

A row of arches in the apse end, a cornice decorated with saw-teeth and three loopholes framed by pointed windows, all of which is made of brick. This single-nave church conserves the original south wall and the front.The apse. The door leading to the old cemetery, and the arches of the walls were discovered after a recent wall, built in the 1970's, was pulled down.

High resolution image. This link will open using lightbox, there may be a context switch
Iglesia parroquial de Peñarandilla 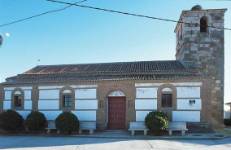