Work by the architect Miguel Fisac Serna, 1985. The construction process of the parish church of Pumarejo de Tera (Zamora), is in itself a unique example of the organization of a people to achieve a common good, the latest 'facendera', a system of organization of immemorial time, which has already fallen into oblivion, which allowed at certain times of the year, make works in favour of the community.

The construction of the Church became a social phenomenon in which all people of the village seduced a prestigious architect for carrying out a project in which all the neighbors were involved altruistically: grandparents mixed cement, women carried buckets of water, stones and material, and the strongest people extracted blocks of quartzite at the foot of the work and placed them in the façade walls guided by two quarry workers of the area. Daily gangs of at least fifteen people, who built the Temple in 73 days free of charge, were organized.v 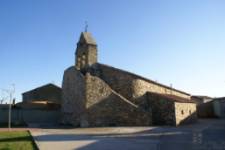