There were three building stages. On the earliest stage, they built the apse end (12th-13th century). In the 16th and 17th centuries they built the arches separating the two naves, whereas the portico and the tower were added in the 18th century, when the church underwent many alterations. The last restoration took place between 1981 and 1983, when the thirds nave was eliminated and the church recovered its original form.

The limestone portico represents one of the riches sculpture works in the province of Segovia. The south side features a row of round arches that originally rested upon parted columns. 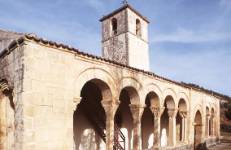