The Church, raised in well-carved sandstone masonry and numerous stonework marks, draws a rectangle where its three naves and the transept enter. The naves, from the 16th century, are covered by a wooden frame, octagonal at the beginning and torque and knuckle later, similar to that of the Villoria church. From the same century is the graceful tower, located at the foot, in which a Plateresque doorway opens.

The head, topped with a flat head, and the transept, roofed with half-barrel vaults with lunettes, date from the 18th century, as did the sacristy. 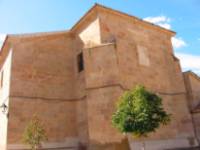