It dates from the beginning of the XIII century, although it was subsequently very reformed. The temple is a single nave which is accessed by a small façade at the beginning of the XIII century. The church has a barrel vault with transverse arches very near each other. A century later, the main chapel, covered with star-shaped vault, will be built and inside a sculpture of Santiago is stored. 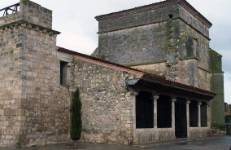