In 1128 the king Alfonso VII granted permission to the town hall to build a church, that is why the church is called Santa María la Real (the Royal One). The building has five naves reminiscent of the church at Las Huelgas, Burgos. It has a receding transept. It used to have exterior colonnades on the south end, which were destroyed when the cloister was built, the late 15th century. 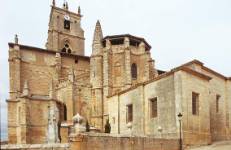