As stand-alone building with two naves of unequal width and separated by three lower rest arches on thick columns. It was rebuilt in 1982 and the chevet is kept intact, covered with gothic vault, dated in the XV century, and the belfry, at the foot of the nave, which also seems to be original, between the XVI and XVII centuries. 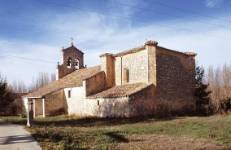