The majestic church of Santiago Apostol, begun its construction in 1550 with plans of Alonso de Covarrubias. It has a hall floor with three naves and polygonal shaped presbytery chevet. We found a central apse, two small side chapels, a vestry and a tower. Six large Tuscan columns separate the three naves. The granite ashlar of the church is perfect. There are three outer portals and one inner leading to the sacristy.

Among the floors of the two towers, of which only the side of the Epistle is finished, is the main jack entrance, and on it within a niche, the image of Santiago appears. Inside, the altarpiece of the main altar of 1625 consists of three floors and the roofing; the first and second floors are composed of five blocks and the third of three. The side aisles are formed by golden fluted columns. 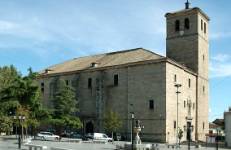 High resolution image. This link will open using lightbox, there may be a context switch
Iglesia parroquial de Santiago Apóstol