Rock Church of the Santos Justo and Pastor

historically, in the environment Olleros has happened an important human activity , as we can deduce of the numerous caves inhabited since Prehistory. One of the most striking artificial caves is the parish church of Olleros, located on the outskirts of the village and of whose outside you can only see by a small Atrium built in modern times.

Inside, it follows the same schemes of a Romanesque temple, with two naves topped by barrel vault and its respective apses with the typical quarter sphere. The set is completed by a Sacristy, which is thought it is the oldest part of the temple, and a funeral chapel with an anthropomorphic burial sculpture which is identical to many others in the surrounding area 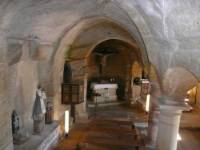