A central place for the production of salt.

The Salinas of Poza de la Sal is a place where the terrains descend suddenly to the plain of La Bureba, as a wide diapir of more than 2.5 km. The edges of this crater contain themselves the salt basin, and its walls show the geological history of the place since the formation of the salt which corresponds to the Triassic, Jurassic and Cretaceous periods.

It is an area with Roman remains. Until 1298, it was a place whose owner was the State and then was donated by Fernando IV to Juan Rodriguez Rojas. During all the Middle Ages, the Poza villa became a great production and trading center of the salt, jointed to the family Rojas. At the middle of the XV century, the castle and wall were built to defend the salt pans and their distribution. Until it was decided that it would be the State the owner of the salt, since it was who bought and sold it, by order of Felipe II. 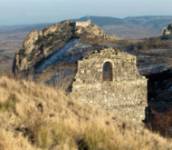