It was also known as Casa de Gentiles Hombres until the XIX century. It was built between the year 1774 and 1777, following the plans of the architect Mr. Jose Diaz Gamones, author of other works such as Puerta de Segovia and Fabrica de Vidrio. The name of Casa de Francisco Bauer was achieved when it became a property of this financier in the XIX century. 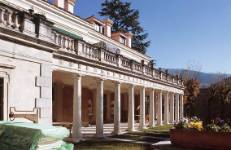