Recreational farm for the Dueñas. In the central patio there is some impressive painted plasterwork from the 16th century. Built by Rodrigo de Dueñas in the outskirts of Medina del Campo, the way of suburban recreational villas which back then were made in Italy or which were characteristics of the Muslims in Spain, a tradition that continued the Spanish nobility and of which barely have been preserved remains. 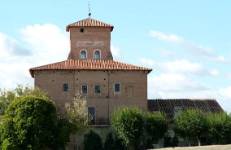