It is a Baroque palace which was built by the architect Ventura Rodríguez possibly. Its founder was Don Francisco Diaz-Santos de Bullon, Bishop of Barcelona, and Lord of Sigüenza, born in Guardo. It was a building of rectangular ground plan and double floor of 25 meters of façade. Only the facade of the Palace is preserved today.

It is of ashlar, it has eight windows, the four lower are latticed, and in the middle there is a large balcony, decorated by a splendid forge. There are over three pinnacles; the central one is crowned by a female figure and in the center the shield of the Archbishop Bullon. Accompanying this, on both sides, a shield symbolizes Bullon's arms and a second one that boasts of his nobility. The eaves of the façade are decorated with mouldings and simple corbels. It was used as an institute until recently. 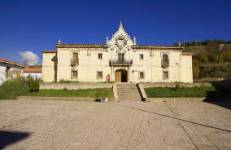