Palace of the Duque de Medinaceli

Palace built in the 16th and 17th centuries, now housing one of the most interesting roman mosaics in the region.

It is a late Renaissance ensemble built at the beginning of the XVII century, but echoing palatial models of the advanced previous century. It has a horizontal façade with a portal in the centre, and main floor distinguished by balconies topped by curved pediments, except in the centre, where stands the ducal shield of the Medinaceli. 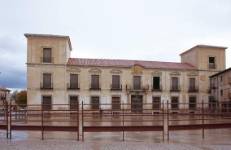