Palace of the Former Provincial Court

The Palace of the Old Provincial Court of Soria is a beautiful neoclassical work from the 18th century that is built on an old Renaissance palace, owned by the Marqués de Velamazán, to become the City Council and prison of Soria.

Over the years, it has hosted other functions being also the House of the Lineages and not many years later the seat of the Provincial Court. Finally, with the transfer of the audience to another building in the city of Soria, in 1986 it was completely remodeled for its current use as a Cultural Center.

It currently has three floors that house, in addition to the theater, two exhibition halls and two conference rooms.

The building has two facades. The east façade opens onto the Plaza Mayor, has two floors and is finished off by a large clock installed in 1862, with a wrought iron metal assembly that supports some bells. It is the old clock in the Church of Nuestra Señora la Mayor. This façade is prolonged by Pósito street, which is also double height.

The perpendicular north-facing façade opens onto Sorovega Street, with six small holes that are distributed in two heights, with a thick wrought iron fence, referring to the use of the palace as a prison. 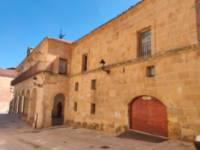 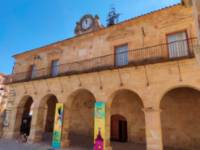 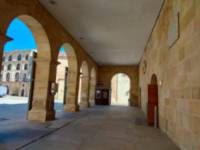 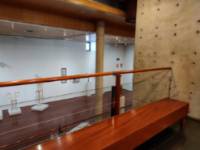 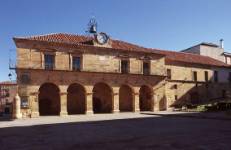