Castle of Cabia - Fortified House of the Rojas

In the XV century, the Rojas family ordered to built a fort house on an original fortification (XIII century) composed of a tower and a fence. In 1419, the Bishop of Palencia and Toledo, don Sancho de Rojas, founded in favour of his nephew, don Juan Rodríguez de Rojas, an estate that included the village of Cavia and its fort house.

The fortified complex is a little complex and irregular shape. It is mainly formed by a tower and a polygonal fence, which, over time, were added the fort house and new elements as a result of various extensions.

The oldest part seems to be the tower and a section of canvas's rounded profile located on the South side. The tower is rhomboid floor and unequal sides. It has some loopholes and a blinded mullioned window forming pointed little arches on the north side. The top is a later addition. Of its four floors, three are used currently as a dovecote.

The tower is of masonry, and the fort house of ashlar. 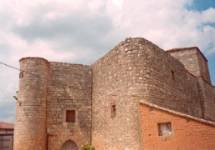