Houses of the Treaty of Tordesillas / Living Cartography

The houses where negotiations took place in 1494 finishing in the signing of the Treaty of Tordesillas between Spain and Portugal. Two houses converted into the Casa de Cultura to commemorate the 5th Centenary of the treaty.

The 16th century house on the right is the nearest to the church of San Antolín, its ground floor is made of stone with a moulded square door, coats of arms on either side and large rectangular windows. The other house also has the ground floor of stone, accessed through a flattened arch above which are three coats-of-arms, the highest one, below the edging is the royal coat-of-arms. 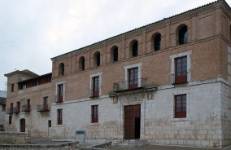