Stone ashlar work. It has pointed arches with a barrel vault. Built in the reign of Fernando II, it was altered later. It is from the 12th century.

It opens between two crenellated towers that over the front lancet arch joined by a curtain wall where the coat of arms of the town and the one of the Velasco framed in a Franciscan cord as an alfiz can be appreciated separated by an empty niche. 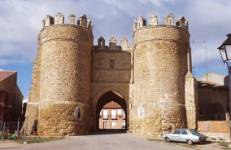