To prepare the cake:

To prepare the filling:

Separate the yolks from the whites. Put these into a bowl with a pinch of salt and beat until stiff. Add, once whisked, the yolks and later the sugar. Remove constantly about 10 minutes, after which add the flour, little by little, and in the end, the melted butter. Put it into a round mold previously buttered and sprinkled with flour.

Put it in the oven over low heat for 45 minutes. Once out of the oven and already cold, it can be stuffed to taste.

For the preparation of the filling, make a very shallow cut (1 cm) with a knife, half way up around the whole cake. Put a thread by the cut; tie the thread at its ends and pull gently. In this way the cake will be perfectly cut into two halves. Separate the two halves spreading the cream and put together the two halves again. Spread this slightly more with the rest of the cream and decorate the base.

On the other hand, put sugar and a few tablespoons of water in a pot to heat. Bring to a boil over medium heat. When it starts to boil, add half a glass of water and make the syrup. When the syrup is warm (never hot), mix it with the yolks gradually, stirring to get a very smooth mixture. Remove from the fire and let cool slightly. Once lukewarm, spread the top of the cake with a flat brush.

On top of it you can decorate with cream with the form of hazelnuts. 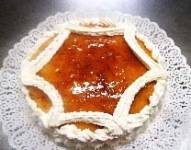