Erected in the beginning of 1424 by Dominican monks from Guimarães who had obtained a royal licence to build a monastery outside the city walls, the Cathedral of Vila Real continues to be known as the Church of São Domingos and constitutes the best example of late Gothic architecture in the Umbria region, although it still includes accentuated Romanesque features. In the 16th century, during the reign of D. Manuel, it underwent a first remodelling, as attested by a door surmounted by an armillary sphere (a representation of the universe that became the Manueline symbol of maritime, political and economic power associated with navigations). Later, in the 18th century, larger works were carried out and the building started to display elements of baroque style, such as the current main chapel, the bell tower (from 1742) and the large windows on the side walls.

The extinction of religious orders in Portugal in 1834, with the consequent nationalisation of monastic belongings, and a large fire on November 21, 1837, destroyed the convent’s interior and much of the church’s furnishing. Later, in 1922, after the elevation of Vila Real to diocese by Pope Pius XI, the church became a Cathedral. Since then it has undergone several modifications which have added more contemporary elements, such as a set of stained glass windows by painter João Vieira, inspired by the "Gospel According to Saint John".

A visit to Vila Real Cathedral thus offers a journey through the centuries. In 15th-century capitals can be discovered, hidden among the foliage carved in granite, predominant figures of the medieval era: a father, a warrior, a hunter brandishing his lance for a boar, grape pickers harvesting the grapes. Several gothic arches are found in the huge walls, among them one that contains the tomb of Portuguese navigator Diogo Afonso and his wife Branca Dias (15th century). In the sacristy you can see a small, well-preserved 16th century plank depicting the Virgin.

Finally, admire the cathedral’s modern symphonic organ, built in the 21st century and probably the most modern in the country, with its four keyboards, thirty-three stops and a total of 2,192 pipes. 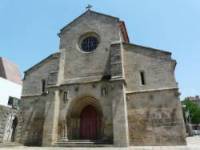