Following a political and religious reorganisation by King D. João III that affected the cathedrals of Portalegre and Leiria, construction on the Miranda do Douro Cathedral begun on May 24, 1552; the consecration of the altar dates from 1586. The work implied the destruction of the old Santa Maria Church, a Gothic temple erected during the reign of D. Dinis in the 14th century. Gonçalo Torralva and Miguel de Arruda, with subsequent execution by Francisco Velasquez, completed the construction in the early 17th century, maintaining Episcopal status until 1780, when the diocese was transferred to Bragança (having the designation of Diocese of Bragança and Miranda). This building was thus designated as a Co-cathedral or simply as the Main Church of Miranda do Douro.

The transfer of the headquarters of the diocese may be linked to the history of Miranda do Douro, which, due to the condition of its border, fell twice into the hands of the Spanish during the 18th century. Bragança was less exposed to external threats.

Mannerist in design, this remarkable temple has a harmonic facade, in which a central body is flanked by two powerful towers, with a trio of gothic vaulted naves inside, its ogives webbed with latticed ribbing. The main altarpiece, a set of sculptures dedicated to Saint Mary Major, dates back to the 17th century and is the work of Gregório Fernández, a Galician master who settled in Valladolid and spearheaded a very active workshop during the Mannerist period.

Inside the Cathedral there are other altarpieces that deserve the attention of the visitor, such as those of Saint Benedict, Our Lady of Remedies, the Relics, Saint Amaro or the altarpiece of Our Lady of the Rosary (now the Sacred Heart of Jesus). Visitors can also see the Baroque altarpieces of St. Peter, St. Jerome and Our Lady of Mercy, dated from the 18th century. The Cabido choir’s chancel, a work of great refinement and rarity, dates from the 17th century and is Mannerist in style.

The Miranda do Douro Cathedral is also known for housing an icon of popular religiosity - the Baby Jesus of Cartolinha. One can see this small 18th century image in a baroque gilded oratory, where devotees place their offerings.

High resolution image. This link will open using lightbox, there may be a context switch
Concatedral de Miranda do Douro 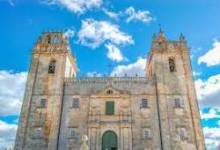 High resolution image. This link will open using lightbox, there may be a context switch
Concatedral de Miranda do Douro