It follows the outside of the old medieval wall.

Since the Prehistoric times, Roa became a place frequented by farmers and ranchers communities due to its strategic position. It has been documented as a village from the I Iron Age, formed by people from the so-called Cultura del Soto de Medinilla.

The archaeological area is currently out of the old medieval wall.

Between the VI and IV centuries BC, these settlers produced handmade pottery, used bronze tools and began to learn how to make iron. In the century I, the territory got romanized after the capture of Numantia and the village got much reduced. 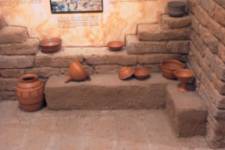 High resolution image. This link will open using lightbox, there may be a context switch
Yacimiento de Rauda

It is a recreation of the different aspects of the life of Pre-Roman tribes and the occupation of Roa. It includes a tempo-cultural field which goes from II/III centuries BC to V AC.