Easter is the most important social and religious event in the city. The city in full participates with fervor and austerity of this feeling, which reaches several very intense moments throughout the ten days in which the city is immersed in its processions. Seventeen are the brotherhoods that, from Dolores Friday to Easter Sunday, turn the streets of the city into a living museum that feels the passion, death and resurrection of Christ, representing it with its more than 40 steps.

Easter, which dates back to the 13th century, is one of the oldest and most prestigious in Spain. Declared of International Tourist Interest in 1986. In 2015 the Junta de Castilla y León, with the supervision of the Ministry of Culture of the Government of Spain, declared it a Site of Cultural Interest, making it the first Holy Week in Spain to display this declaration. Zamora is the only city in Spain that has a Museum of Holy Week, worthy of contemplation, in which most of the Steps that parade at Easter are kept.

This Holy Week has been preserved for centuries, defined by austerity, silence and prayer. The antiquity of its brotherhoods is enriched by the quality of its sculptures, which can be seen in the Museum of Holy Week, which displays 37 works of passion, highlighting the most prolific sculptor, Ramón Álvarez.

Whoever lives this Easter will be surprised by the feeling, the faith and the contrasts of celebration. The Penitential Brotherhoods parade at night and early in the morning, accompanied by hundreds of barefoot brothers in absolute silence. This contrasts with the luminosity of the daytime processions, with valuable images that are equally dramatic and moving. There are many essential moments such as the singing of the "Jerusalem, Jerusalem" on Holy Monday; the Oath of Silence, in the Plaza de la Catedral, on the late night of Holy Wednesday; the thrilling night procession of the Capas Pardas on Holy Wednesday and that of the Lying Christ with the overwhelming singing of the Miserere, in the Plaza de Viriato, which makes your hair stand on end; the departure of the "Five of Cups" at 5 am on Good Friday and the joy of the meeting at 12 am on Easter Sunday.

It maintains old customs, traditions and characters, such as "El Barandales" and "El Merlú". The Procession of Silence and the Taking of the Oath. A Holy Week full of unique musical moments, and silence, ... that shocking silence that communicates everything. A Holy Week rich in history, culture, heritage and faith.

High resolution image. This link will open using lightbox, there may be a context switch
Semana Santa 2021 - Concurso de fotografía

High resolution image. This link will open using lightbox, there may be a context switch
Semana Santa en Zamora

High resolution image. This link will open using lightbox, there may be a context switch
Semana Santa de Zamora

High resolution image. This link will open using lightbox, there may be a context switch
Ecce Mater 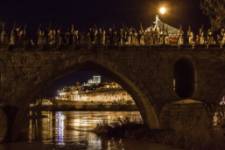