As original in its beliefs as in its purposes.

This convent of Valladolid began its existence in the home of two sisters. We speak of the convent of Ms. Maria de Zuniga and Ms. María Fonseca, who make of their own houses the place where they became nuns, calling them ‘Convent of Santa Cruz, de señoras comendadoras de la Orden de Santiago’. Next to the convent a beautiful three-storey cloister with some other galleries was built. Its stairs, tiling..., along with other beautiful items remain.

Its church is renovated in the XVII century with the support of the daughter of the Counts of Doñate, Ms. Maria Ana Ladron de Guevara, finishing it in 1734 with the help of the Marquise of Contrafuerte. The church has a Latin cross floor, a single nave of three sections, with galleries, balconies and chapels. A beautiful place preserved as an exhibition room, that we can visit and admire. 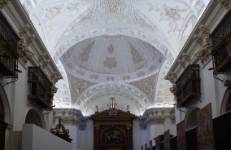