It is a building of header and rectangular nave, built with masonry plinth and walls of mud among brick pillars. The entrance is oriented to the South side, to which are attached two stays which are the baptistery, crowned by a dome of the XVIII century, a sacristy and a simple porch between the two ones.

The belfry tower is Romanesque, while the rest of the building dates from the 16th century, with subsequent reforms. It has an interesting coffered ceiling mudejar. Steeple and coffered ceiling have ensured that the church has the privilege of BIC (Well of Cultural Interest) since September 1982. 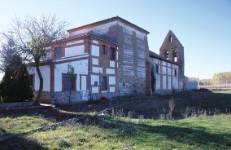