Church of San Julián (11th century) declared a Site of Cultural Interest, it is the oldest in the Laciana Valley.

The origin of the church of San Julián, of Romanesque style, is closely linked to the Corias monastery, in Cangas de Narcea and its consecration, dated in 1090, was carried out by Don Arias Cromaz, bishop of Oviedo, according to what is stated in the founding tombstone that is still preserved inside the temple.

Regarding its formal characterization, it has a longitudinal plan, with a single nave, finished off in a semicircular apse at its head. The nave is divided by a semicircular arch, with part of it maintaining the barrel vault and the other, wooden armor. It is worth noting its huge belfry that houses the bell tower. 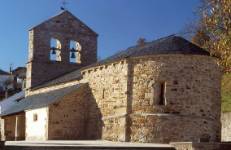 High resolution image. This link will open using lightbox, there may be a context switch
Iglesia de San Julián 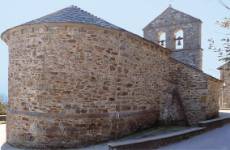