This church features a latin cross ground plan covered by a barrel vault with three chapels on each side of the nave. It was built by Gil de Hontañón, who used renaissance forms and showed a clear taste for the classic (lintel doors and windows).

The main altarpiece was designed by Juan de Herrera and built by the master Juan Sanz de Torrecilla in 1579. The first body is made of stone from the quarries of Urueña and the relieves of the second body show motifs related with the Passion of Christ. The upper body is taken up by a sculpture of Saint Louis, the king of France. The presbytery, located next to the Epistle, contains the mortal remains of Magdalena de Ulloa.

High resolution image. This link will open using lightbox, there may be a context switch
Colegiata de San Luis 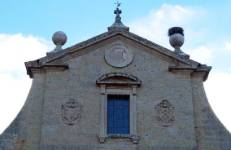