Early church consisted of a nave and main chapel with straight section in the presbytery and semicircular head, but of the original building, carried out at the end of the XII century or beginning of the XIII century, the remains of the apse and two façades are kept only. It was reformed in the XVI and XVIII centuries.

The historical capitals that support the semicircular arch that gives way to the main chapel stand out, attributed to Master Nicholaus. One of them represents three double-headed eagles and the other to Jesus Christ flanked by Saint Peter and Saint Paul. Both retain part of their polychromy.

On the north façade you can also see capitals with plant motifs and feline heads, similar to those of the Santibáñez del Río church.

It was reformed in the 16th century by adding two chapels that give it the Latin cross structure and in the 18th century in which the belfry was placed. 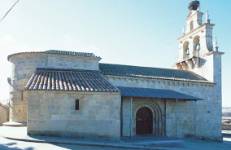