Palace called the archives of the chancery and its prison

Palace of the Vivero - Chancilleria

Built in 1440 for Alonso Pérez de Vivero. On the 14th of October 1469 the wedding of Fernando de Aragón and Isabel de Castilla was held here. Since 1475 it has housed the Royal Chancery. Despite the plaster that covers it, the palace has kept the architectural layout of the era it was built in.

The lower floor has stone pillars and the upper floor brick pillars. It is in the Gothic-Mudejar style common in Castilla in the 15th century. The building has a cellar and is on two levels. It has a 16th-century Tuscan gallery on the south façade. Behind there is a third building, the prison. It is made of stone with solid iron bars. The façade is very elegant and has two towers on the edges and it was built at the beginning of the 18th century. 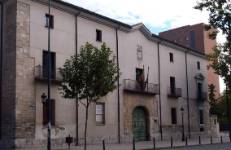