A sun presides over the façade

House of the Sun and Church of San Benito el Viejo

In 1599 these houses were acquired by the Count of Gondomar, who had his coat-of-arms set in the façade, above which rises the sun from which the building takes its name. The façade is in the Plateresque style, flanked on either side by two towers that serve as lookout points.

Next to the Casa del Sol stands the Church of San Benito el Viejo, converted into the palace chapel and built in the Herrerian style.

Today both buildings are annexes to the National Museum of Sculpture, housing the collection of copies of ancient classical figures. 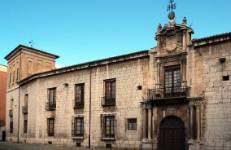