The Romanesque temple where El Cid was married

Work on this temple began in the early 11th century and was completed in the 12th century. Noteworthy features include the early Romanesque apse and other late Romanesque elements including the pointed arches and the 13th century fretwork tower, creating a mix of military and religious styles. It is believed to be the place where El Cid was married.

The main tower rises above the clearly Gothic main façade, with six archivolts and figures that form an attractive contrast with the Romanesque high relief. Inside, there are three naves divided by pilasters that support the rib vaults. The treasures housed in this temple include the 14th century figure of Christ, situated in the presbytery and the 17th and 18th century altars, one of which boasts a Flemish Pieta, the side chapels and a fragment of a Gothic mural on the wall next to the side door. It is clear that this is a unique site, and one not to be missed. 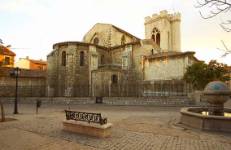