The current church of San Cipriano de Zamora is the result of a series of architectural actions carried out from the end of the 11th century until later centuries.

The church of San Cipriano has its origins in the 11th century, it is Romanesque in style, a triple square apse is preserved from that time, as well as interesting interior capitals. This style of straight head is repeated in other Zamoran churches such as those of Santiago del Burgo, San Juan de Puerta Nueva, San Esteban or Santo Tomé.
From the 12th century are the main arch, the barrel vault and the arch of the Epistle chapel, the south portal and the tower with the passage. The gable and the north wall were reformed in the 18th century.

Inside there are three naves renovated in the 13th century. It has several interesting capitals, both figurative and historical, such as the main chapel. The themes of the capitals are vegetables, biblical scenes such as the Adoration of the Kings or the Expulsion from Paradise.

Baptistery and sacristy originally served as burial chapels. It conserves some pictorial remains that date back to the 14th century (an Annunciation in the main chapel and a Pantocrator with the Tetramorphs in a window on the northern wall). Initially it had a basilica plan, but it was replaced by a single nave, although retaining the triple head characteristic of the Zamora Romanesque.

The Gospel chapel is also protected by a fence dating from the 12th century. The main portal is next to the tower, and is made up of three semicircular archivolts. And the entire eaves are decorated with checkered moldings and human figures. 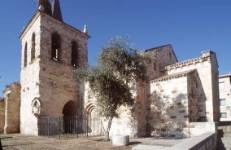 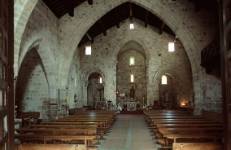